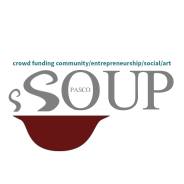 “We are pleased to announce a great selection of Pasco-based community projects dreamed up by individuals ages 20 and younger,” said Pasco SOUP coordinator Isaac Myhrum. “Supporting young people in their entrepreneurial efforts is one of the main objectives of Pasco SOUP. These projects represent the many ideas that young people have to contribute to Pasco. We look forward to the community coming together and supporting these great ideas.”

The selected presenters are:

Pasco SOUP is an event where the three presenters will be given four minutes each to share their idea with the audience. After a community soup dinner, audience members vote for their favorite and the winning project receives the donated proceeds at the door. The contribution collected at the door will be $5 per person.

Pasco SOUP is based on an acclaimed project called Detroit SOUP which started in Detroit, Michigan in 2010. The SOUP movement has grown globally and Pasco SOUP will be among only a handful of active programs in the Northwest.

If you would like more information about this topic, please contact Isaac Myhrum at 509-440-4264 or send an email to pascosoup@gmail.com.